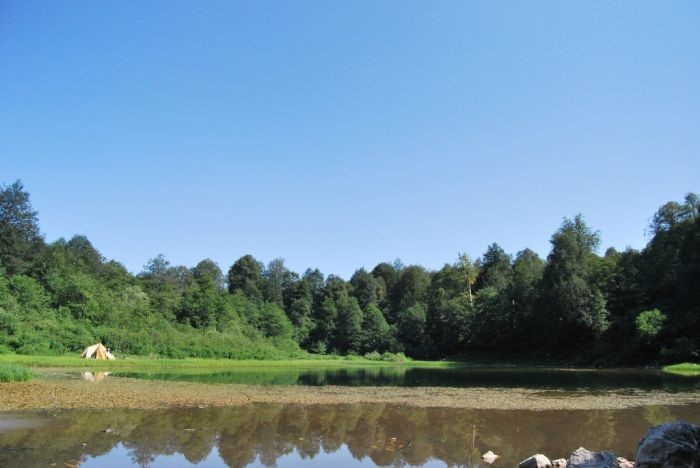 When Saint George lived on earth, he visited Mukhura in Imereti. Many Devs (Devi is a giant, malicious creature) lived there. Saint George told a deacon that he was going hunting and deacon should not open the door to anyone, unless they put their little finger through the door crack. Deacon followed his advice and when he saw a hairy little finger of Devi, he did not open the door and called Saint George for help. Saint George was at the seaside and when he heard the voice of the deacon, he took a large rock and threw it at Devi so forcibly, that it flew over Mukhura and fell in village Barakoni of Racha region. The legend has it that the rock is still there and they call it the One Thrown by Saint George. Saint George immediately went to Mukhura, fought Devi and defeated him. Afterwards he offered his powers to the deacon and told him to disposes the body of Devi. The deacon was too scared and declined his offer. Then Saint George with the hit of his boot threw Devi and several large logs from the mountain. Where Devi fell a lake appeared. They call it a Devi Lake. One can see the logs in the lake. Saint George cursed the cowardly deacon and told him: do not reproduce and do not vanish. Therefore, there was only one man among the deacon’s descendants. They say that if a peasant throws a rock in the lake during droughts, the rain will come and his harvest will be saved.