Posted by : UAadmin@ecotournet.net on 27.May.21

Last update by : UAadmin@ecotournet.net on 15.Jul.21

The center conducts cultural activities and brings together proactive people that are interested in gaining knowledge. It hosts various conferences, Literature Evenings, art events and meetings with interesting people who generously share their ideas and experiences. The center is an ideal place for people who would like to meet new people with common interests, learn the culture of different countries, in particular Israel. 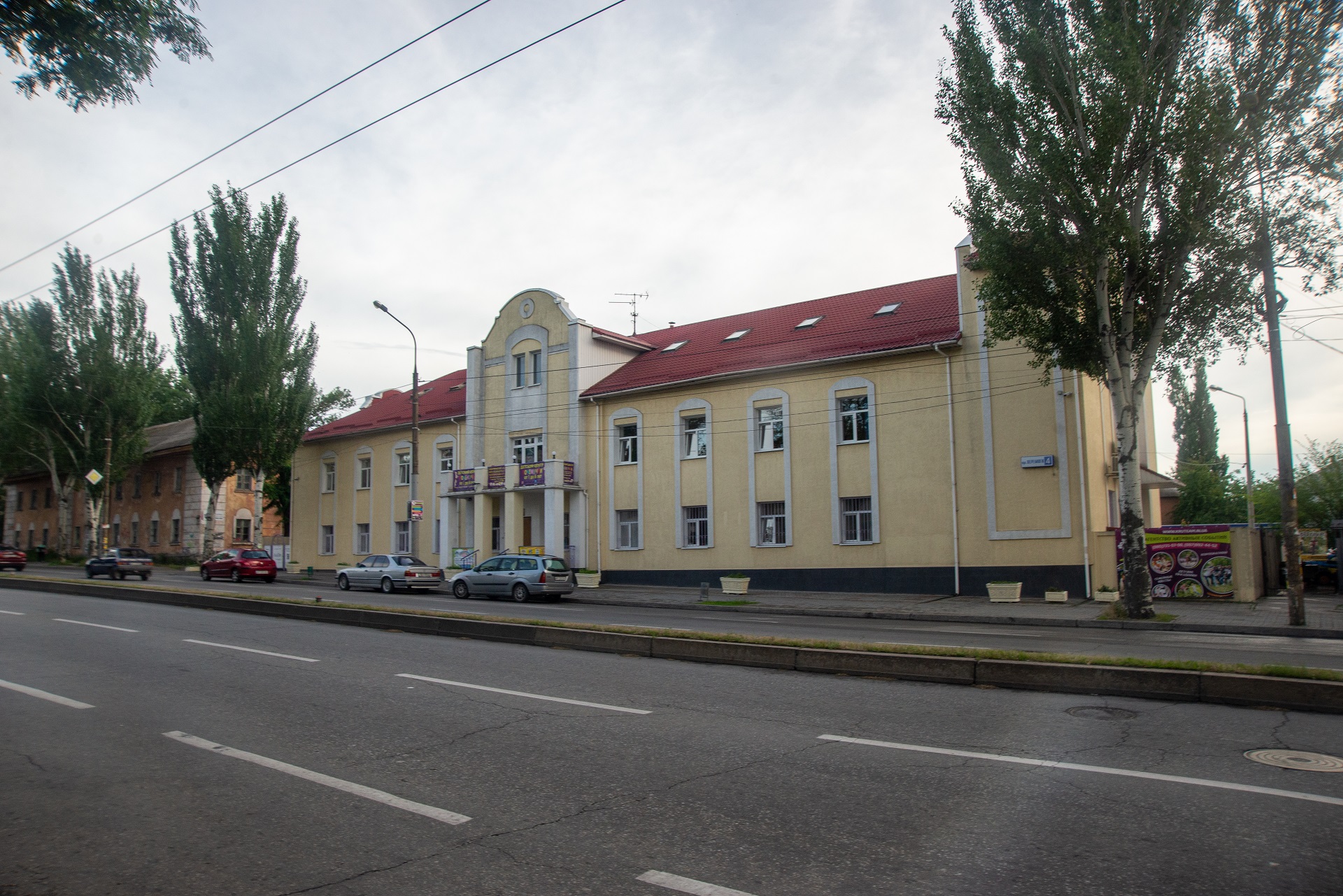 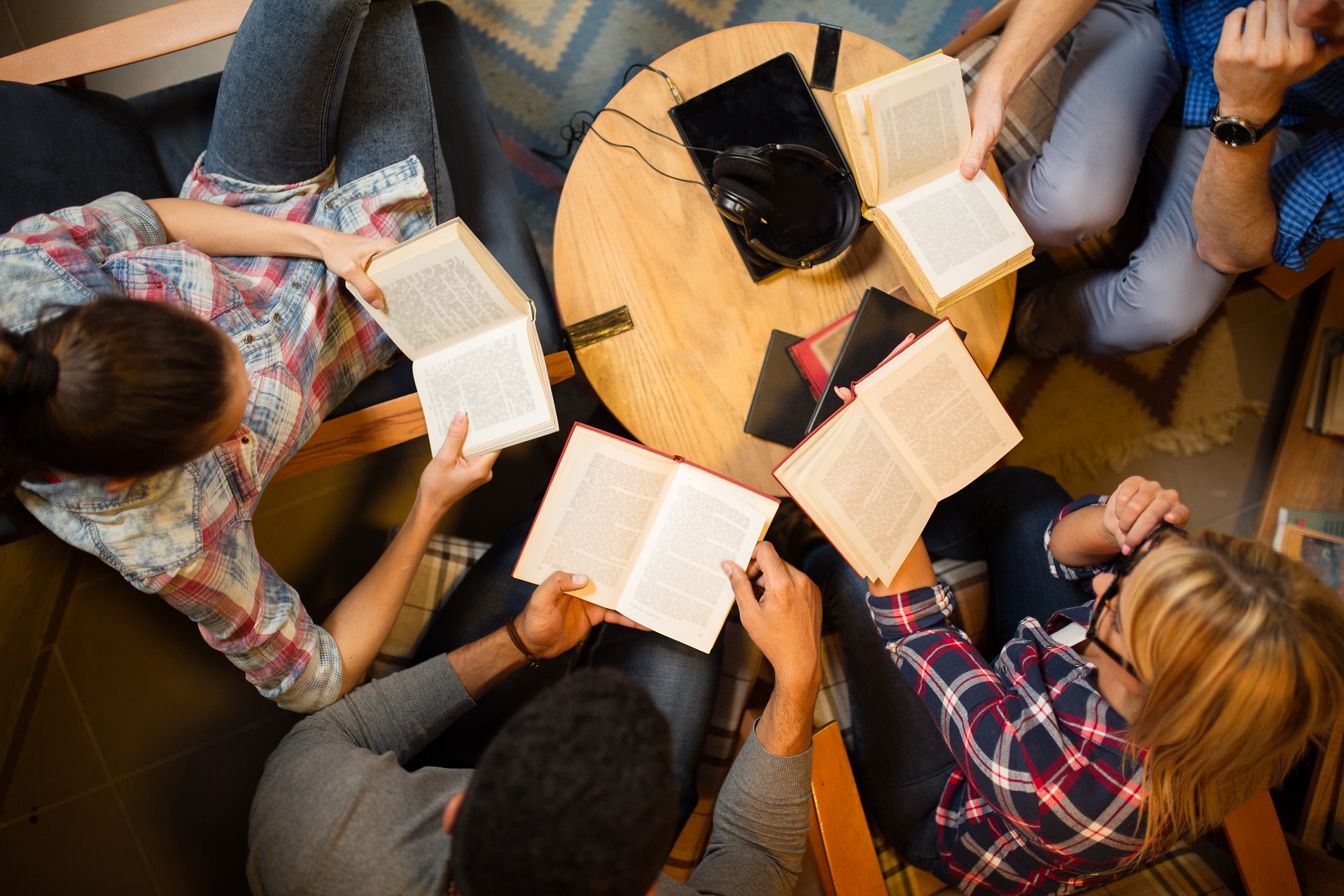 An important element of the Multicultural Center is its library, where an interested reader will find Jewish, English, Romanian, German, Polish literature, translations of world literature works, publications about Israel, the European Union, and current published press.

There are various photo zones (three floors of the center are decorated thematically) within the territory of the center. Each of the three floors is a coverage of Jewish culture, for example, there is the Wailing Wall on the first floor and the Ancient-Europe-style walls illustrating Jewry - on the second. You can buy souvenirs of Zaporizhzia and original works of local artists in the Center. This nice and quiet place will be the first stop in your cycling tour. 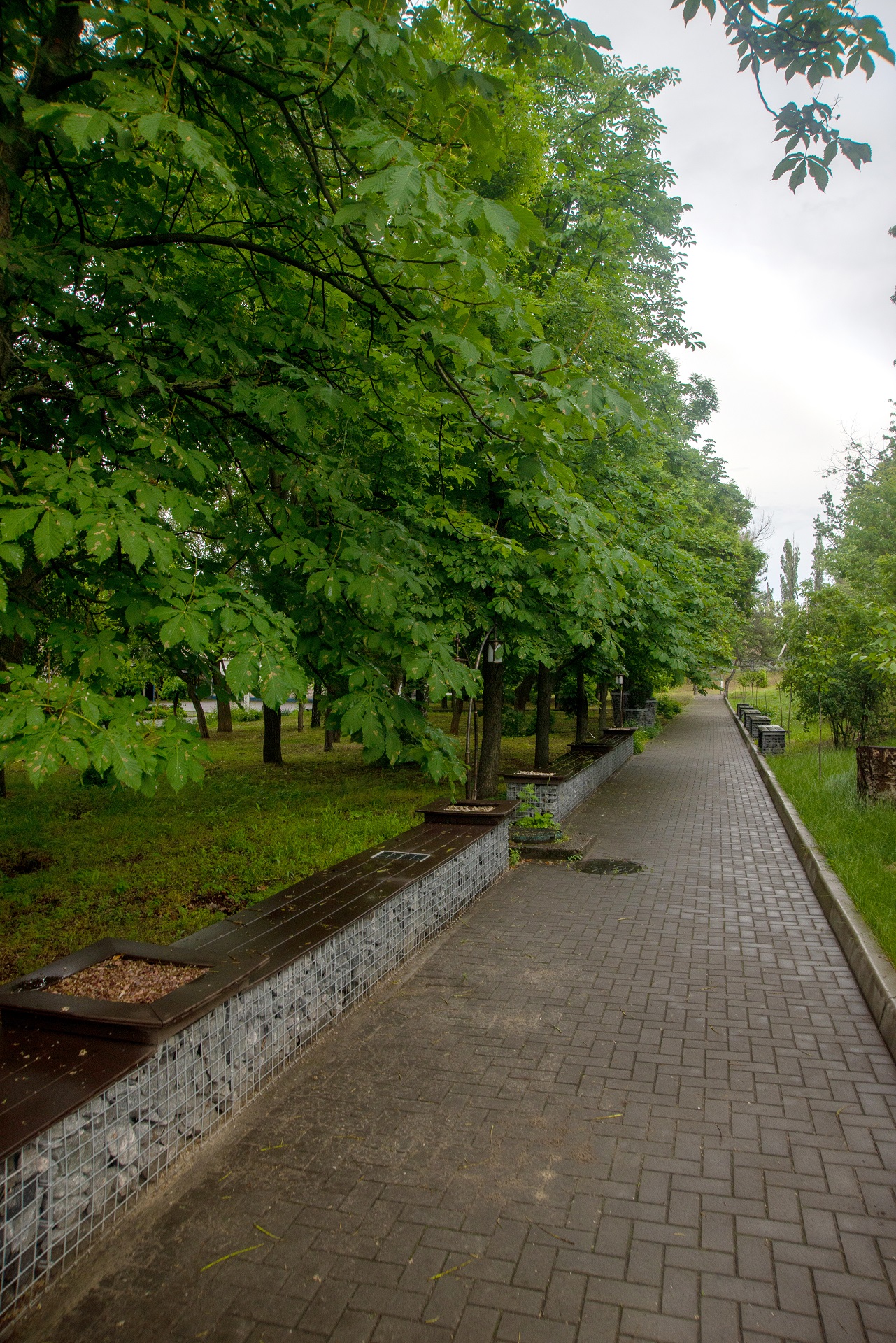 The Park Alcove opens incredible view on the Dnipro. The park has a sphere-like fountain where you can enter the inside of the fountain and feel the effect of a waterfall. There is a huge World Map Panel of live plants in the park alley. 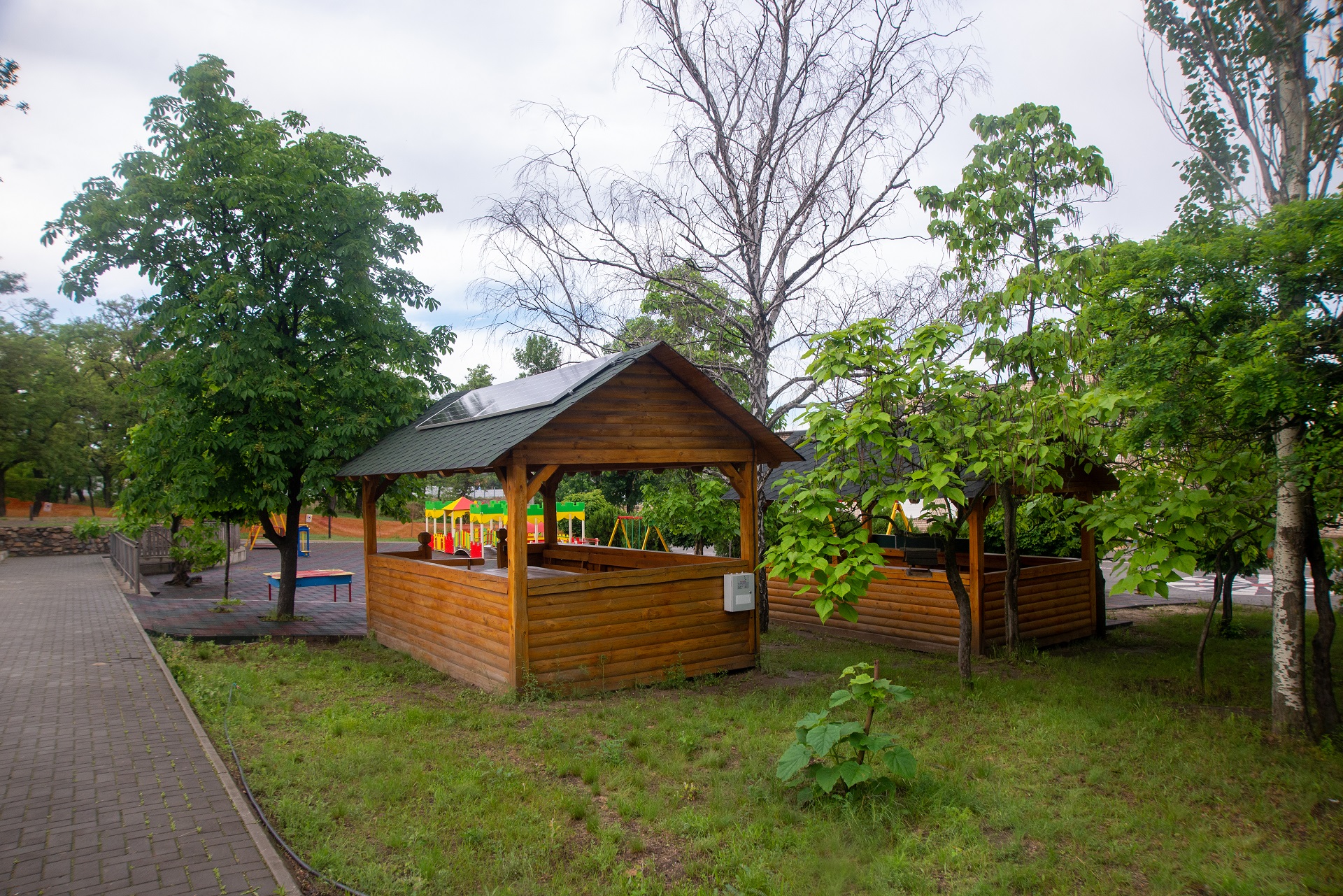 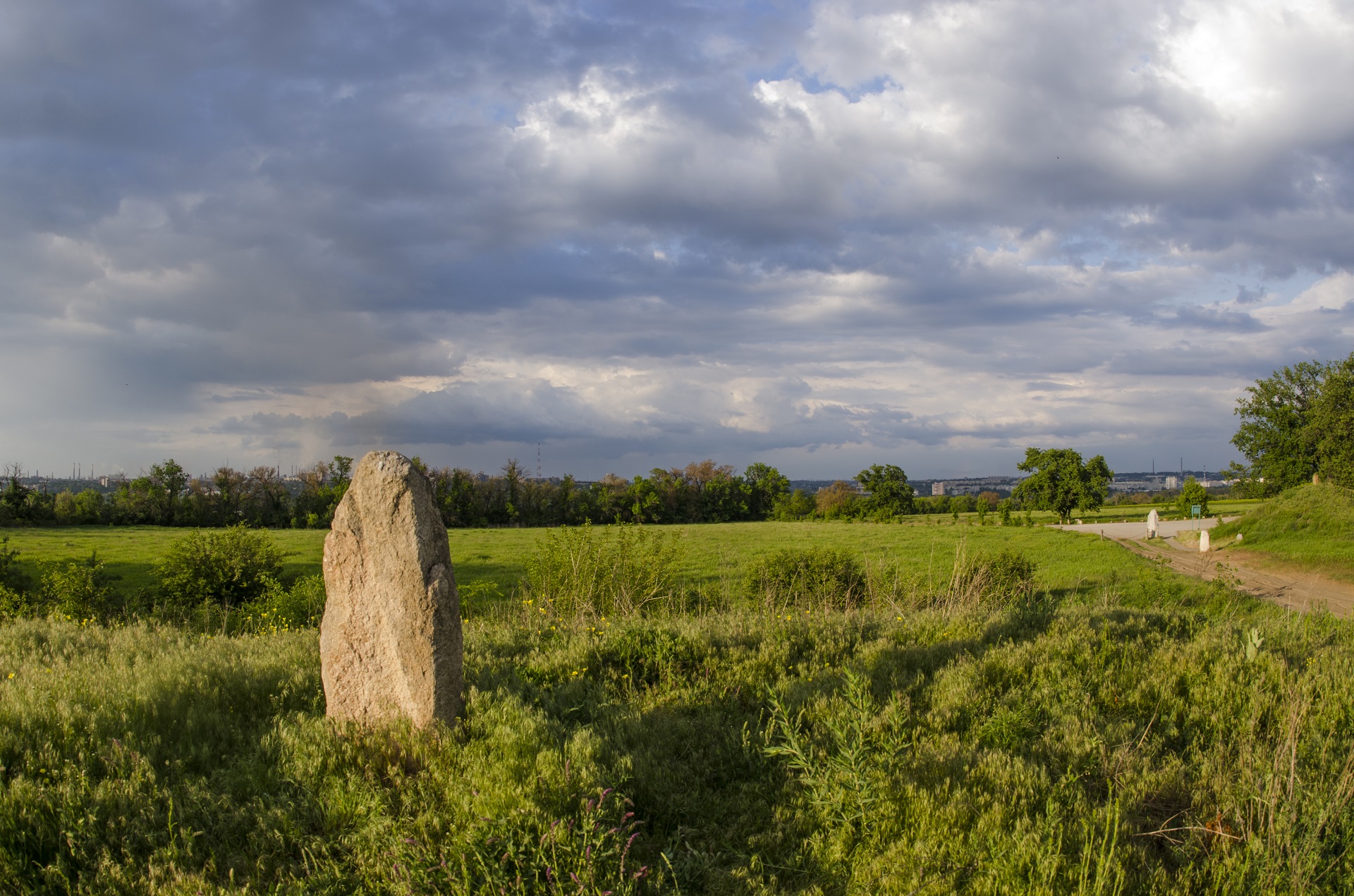 At the beginning of the 20th century, there were 129 mounds of various historical eras on Khortytsia. Only 28 are left to this day. The Scythian Stan is an open-air museum. Within the territory, which is about five hectares, now one can see 11 mounds. In the time of the Cossacks, this point was used as a watch point - there was a special scouting flag tower - Becket on the top of the mound, from which it was possible to see the approach of the enemy in advance and to notify the army about it.

The tower on the Zorova Mohyla is within the best sight of the mound complex. The second part of the complex is a collection of stone figures, household items, gravestones, stone crosses and other stone products. The collection is arranged in the shape of a circle, symbolizing the solar disk or wheel, which were sacred to the peoples who inhabited these lands. 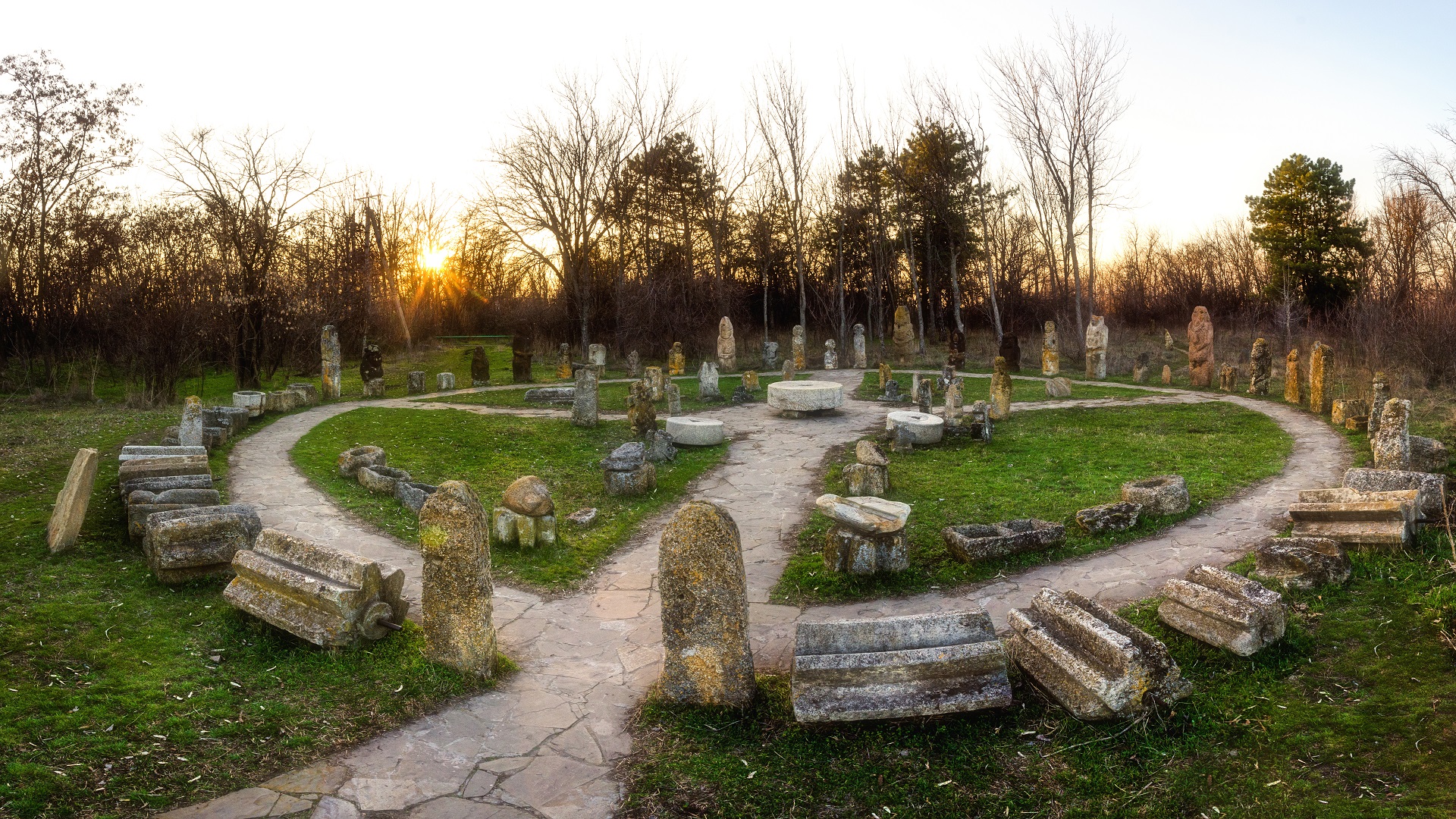 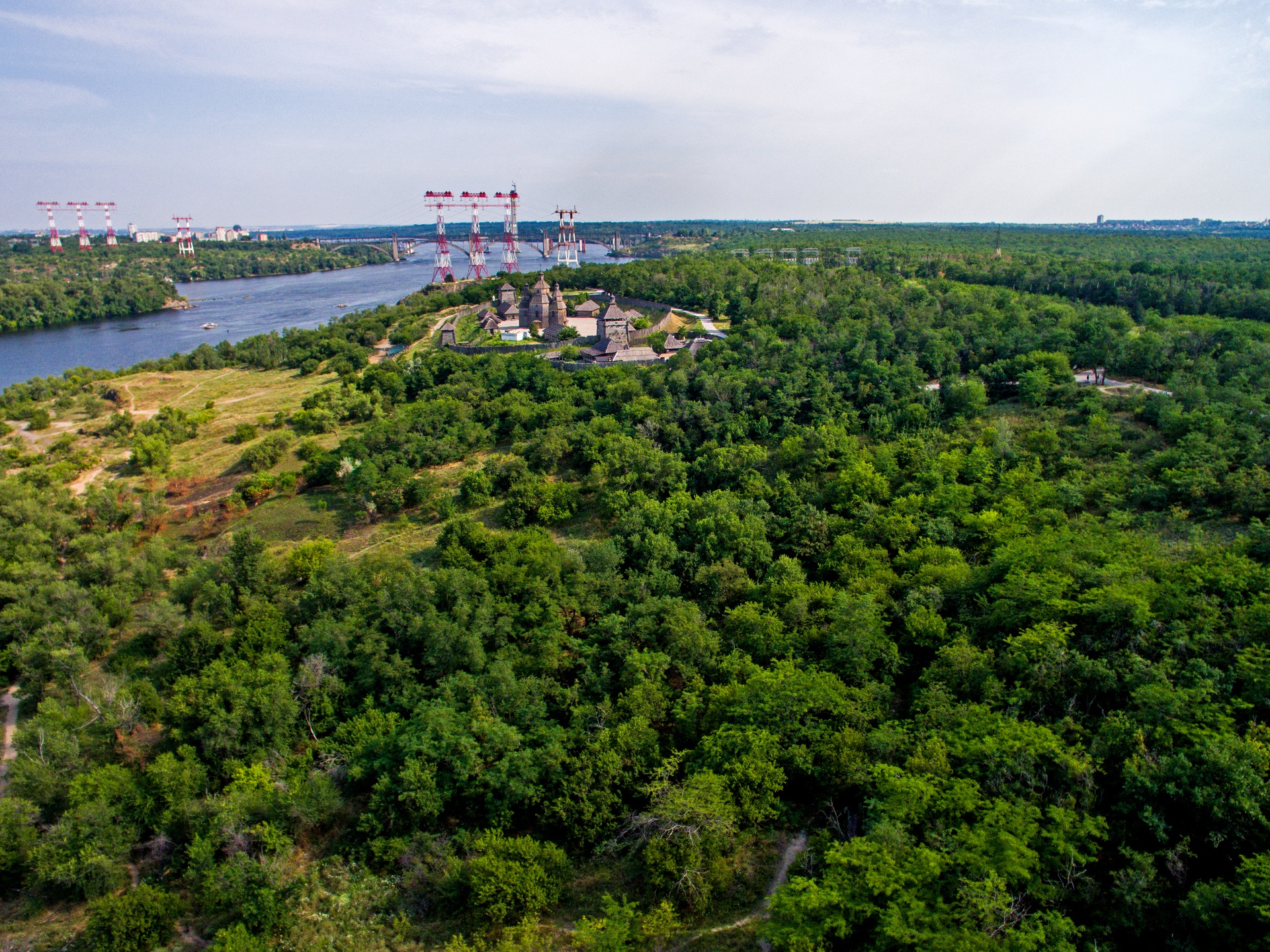 The Sich was the capital of the Cossack region, its administrative, religious, business and military center. Numerous historical evidence and folk art passed us the memory of the Zaporizhzhia Sich - one of the first siches that arose in XVI century when the Cossacks pioneered the southern part of Ukraine. Ostap Dashkevych and Dmytro Vyshnevetskyi, the first leaders of the Cossacks, were connected with Khortytsia in their activities.

The historical and cultural complex “Zaporizhzhia Sich” reproduces the image of the Cossack capital and the atmosphere of the Cossack times. It brings together the most interesting elements of architecture, culture, everyday lifestyle of the Zaporizhzhia Cossacks. There are Cossack kurins (wigwams), a forge, a pottery, a tavern and a Greek house for receiving ambassadors. In the center of the complex there is the church and the square where the Cossacks gathered rada (council), elected their atamans (leaders) and took epy the most important decisions.

The Cossacks’ buildings are furnished as museum expositions based on reliable historical data using original ideas and objects of those times. The central building of the Sich is the functioning Church of Pokrova (the Protecting Veil of the Holy Lady) where traditional worship services are held. The complex is surrounded by fortifications, such as high ramparts, deep moats and a fence made of wooden pointed stakes. 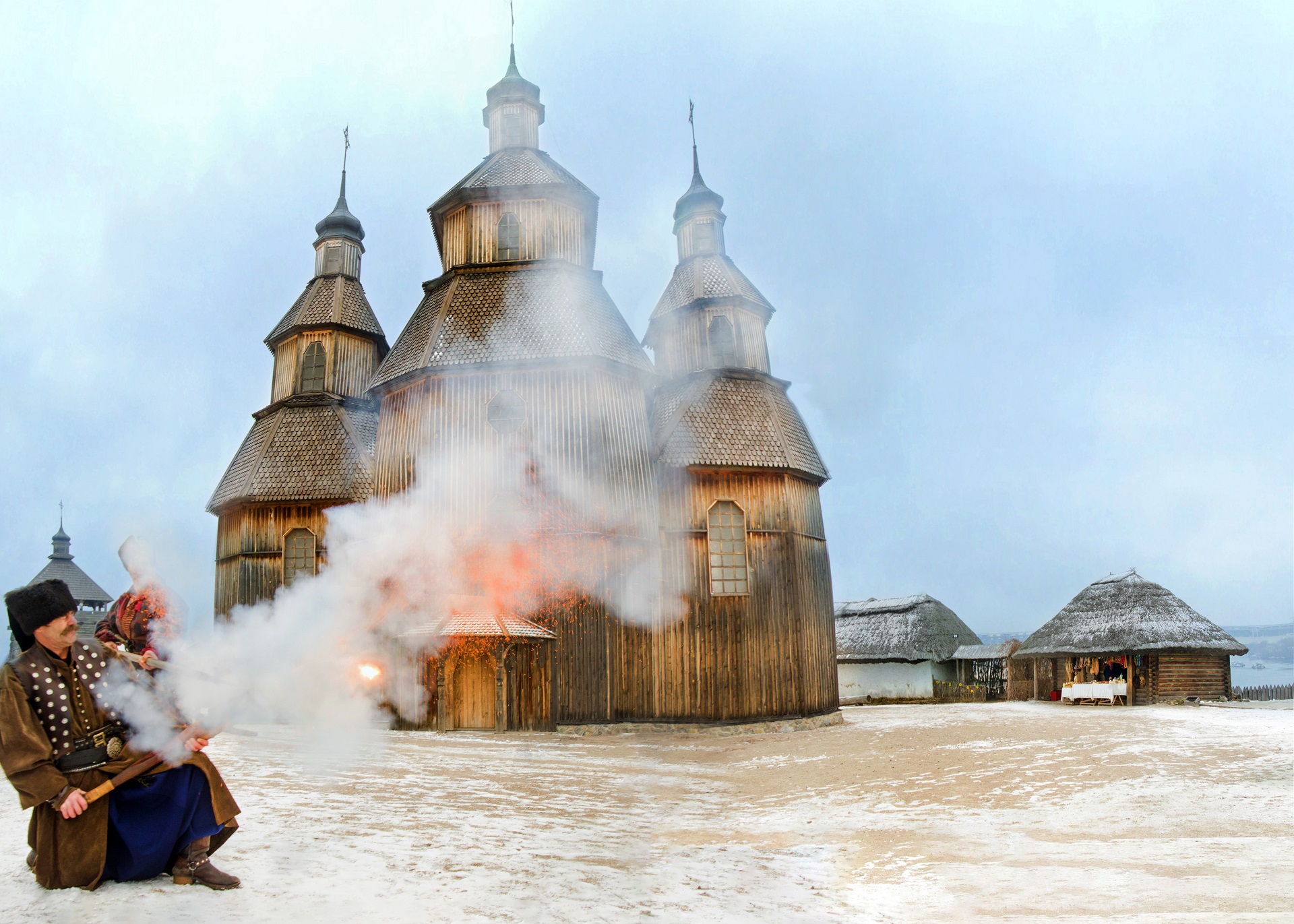 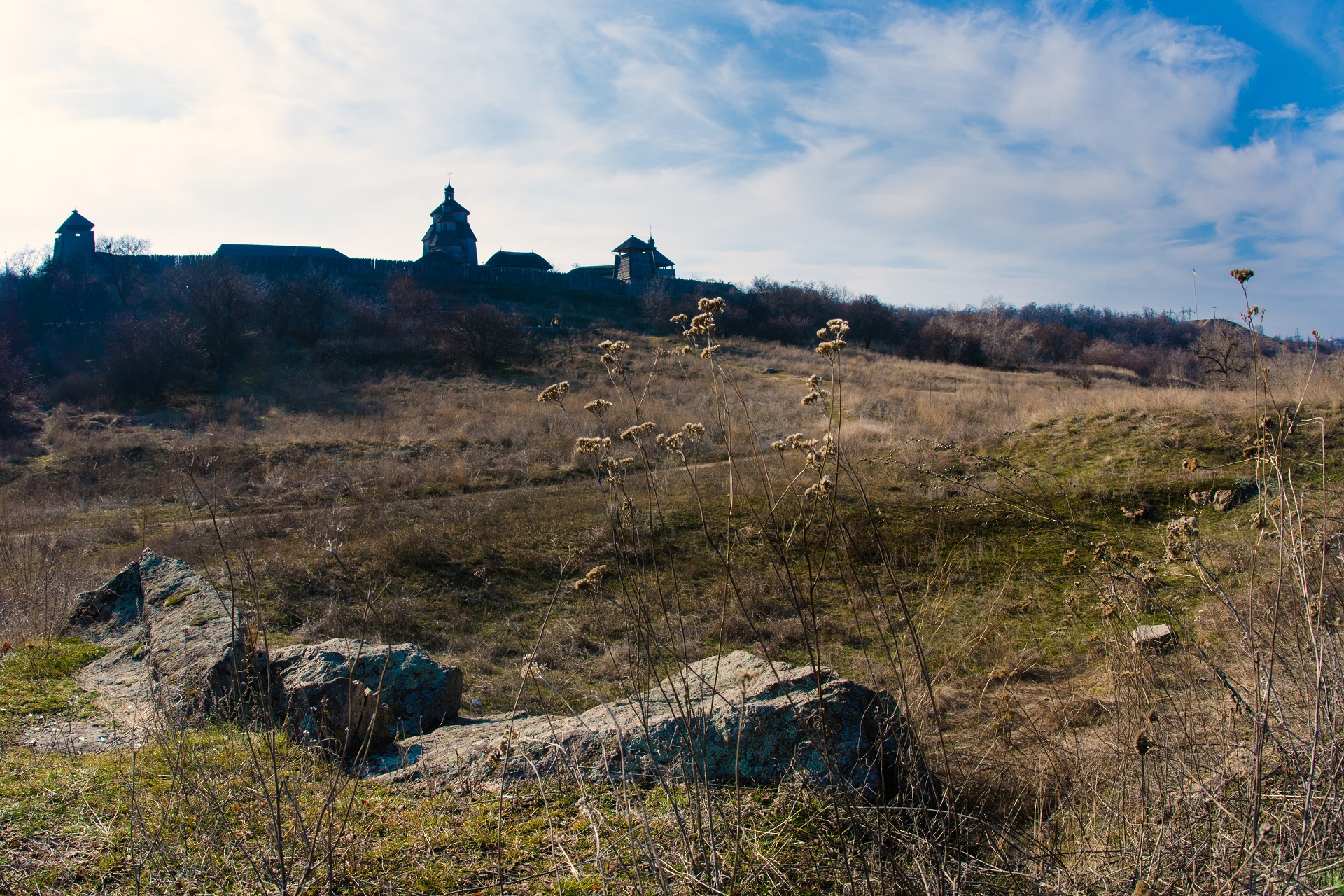 The Zaporizhzhia Sich has become a traditional venue for the national festivals, such as “Pokrova on Khortytsia” and “Easter on Khortytsia”, which attract thousands of tourists every year. They come to attend original workshops on painting Easter eggs, pottery, as well as concerts, celebrations and other spectacular events.

A trip to the “Zaporizhzhia Sich” allows etting in touch with the glorious past of kraine, see saber fights, take part in the Cossack training, see the museum of the Cossacks’s smoking pipes and ride horses. All this leaves unforgettable experiences due to the unique atmosphere and historical spirit of the Cossacks. 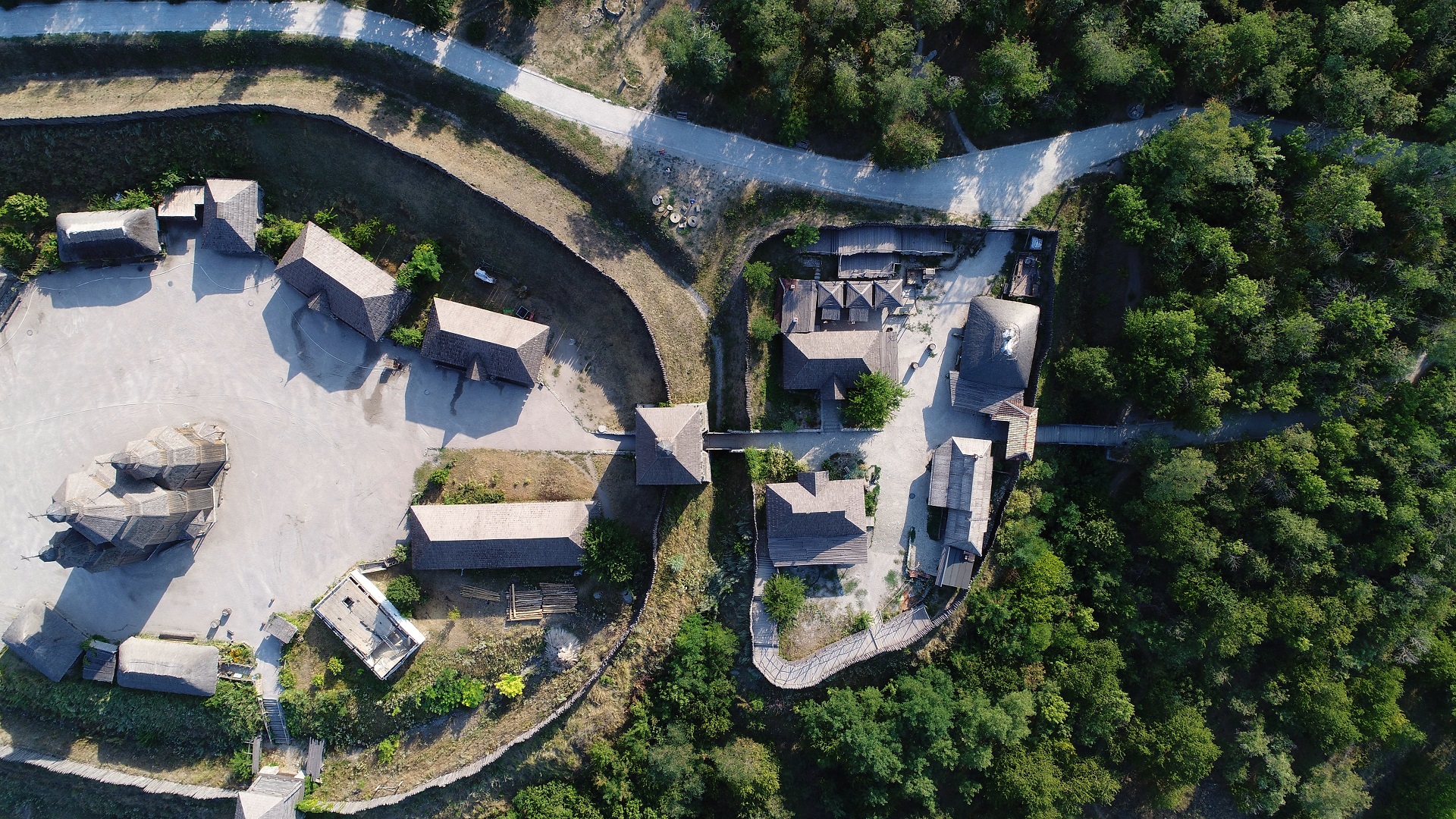 Today the Zaporizhzhia Cossacks History Museum on Khortytsia is one of the most popular places for tourists to visit and one of the richest on historical materials places in Zaporizhzhia oblast. The museum has many interesting exhibitions dedicated to almost all aspects of the history of Khortytsia Island. The exhibition “Khortytsia in Ancient Times” tells about the period of Khortytsia’s history from the late Paleolithic to the early Iron Age.

The exposition “Cossack Boats” is located in another location - the “Marine Museum” is located next to the Horsemen Theater. To date, the museum has collected more than 32 thousand museum items. The exposition and three dioramas are constantly open for excursions: “Battle of the Kyiv prince Sviatoslav”, “Military Council in the Sich”, “Liberation of the city of Zaporizhzhia”. Not far from the museum on Khortytsia Island there is a stone pillar on which it is written that Prince Sviatoslav (the son of Princess Olha) was probably killed here.

There is also a mysterious black stone, which is believed to have great magical power. The observation area of the museum and its territory became a platform for official and cultural events. Oath-taking of lyceum students, police and military personnel is held here. It was from the roof of our museum that October 14 was declared to be a public holiday - Defender of Ukraine Day. Here is within a magnificent sight of the Dnipro, rocky rapids and the DniproHEP. A state flag flies next to the museum on a large mound. There is the “Tarasov’s path” to the museum along the coast, dedicated to the stay of the young poet - T.H. Shevchenko - on Khortytsia in the summer of 1843. It is accompanied by excerpts from the works of Great Kobzar, which mention Khortytsia, the rapids of the Dnipro, the Big Meadow of Zaporizhzhia and Zaporizhzhia Cossacks. There is the “Cossack Circle” nearby - the large-scale festival “Pokrova on Khortytsia” is held traditionally here, which gathers thousands of residents and tourists. 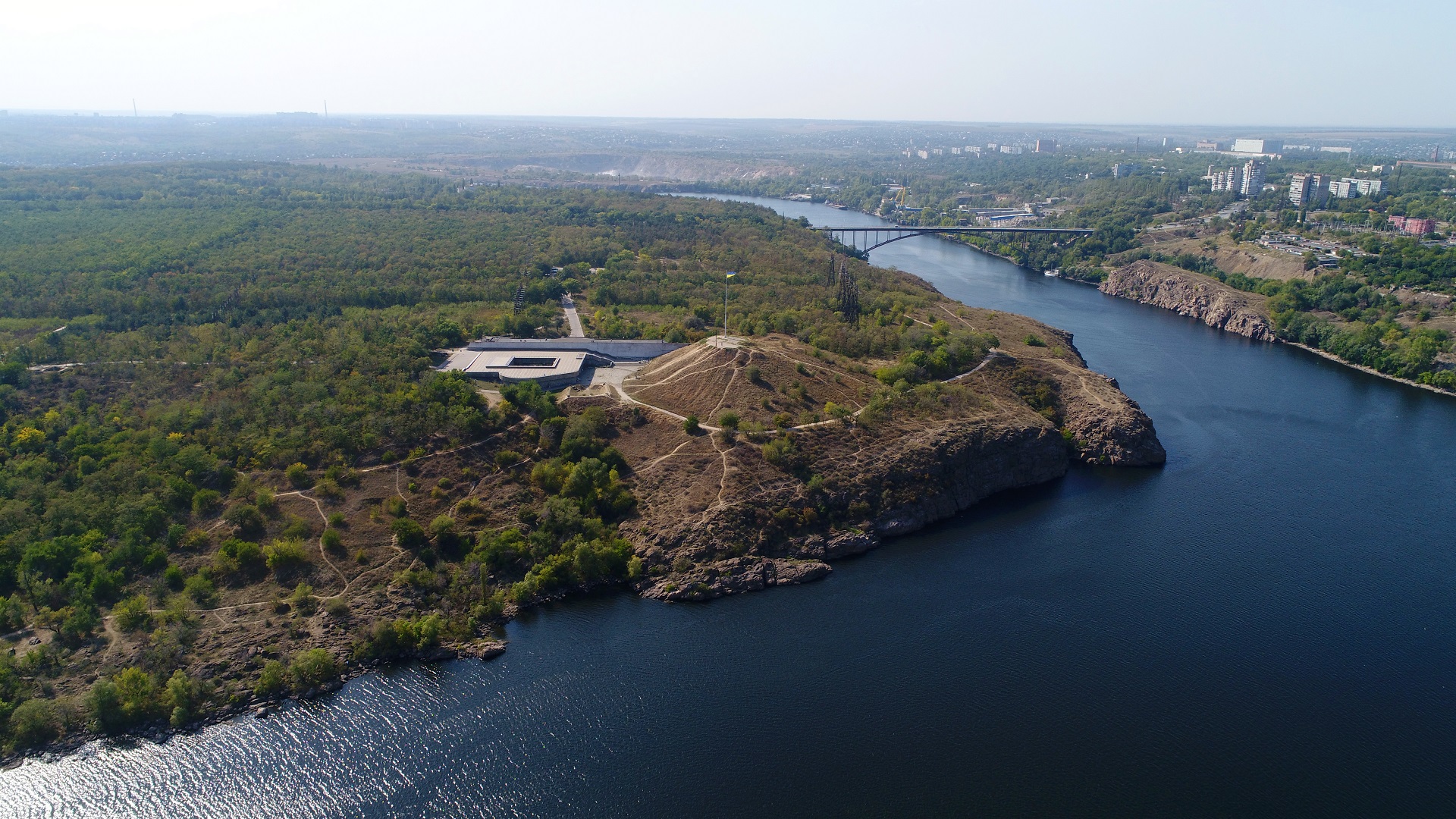 Zaporizhzhia Horsemen Theater is a unique program that offers the folklore and ethnographic performances, Cossack games and entertainment to the residents and guests of the city. The theatrical performance takes place on an improvised stage. The program includes tricks on horses, exercises with spears, sabers and a whip, exciting Cossack games and entertainment. An ancient ritual “Rite of passage into Cossacks” is held with the presentation of an honorary certificate as a keepsake. After the performance, one can ride horses, as well as purchase products of blacksmiths, potters, Scythian jewelry, products with national embroidery, Petrikov painting, family charms and Ukrainian souvenirs. 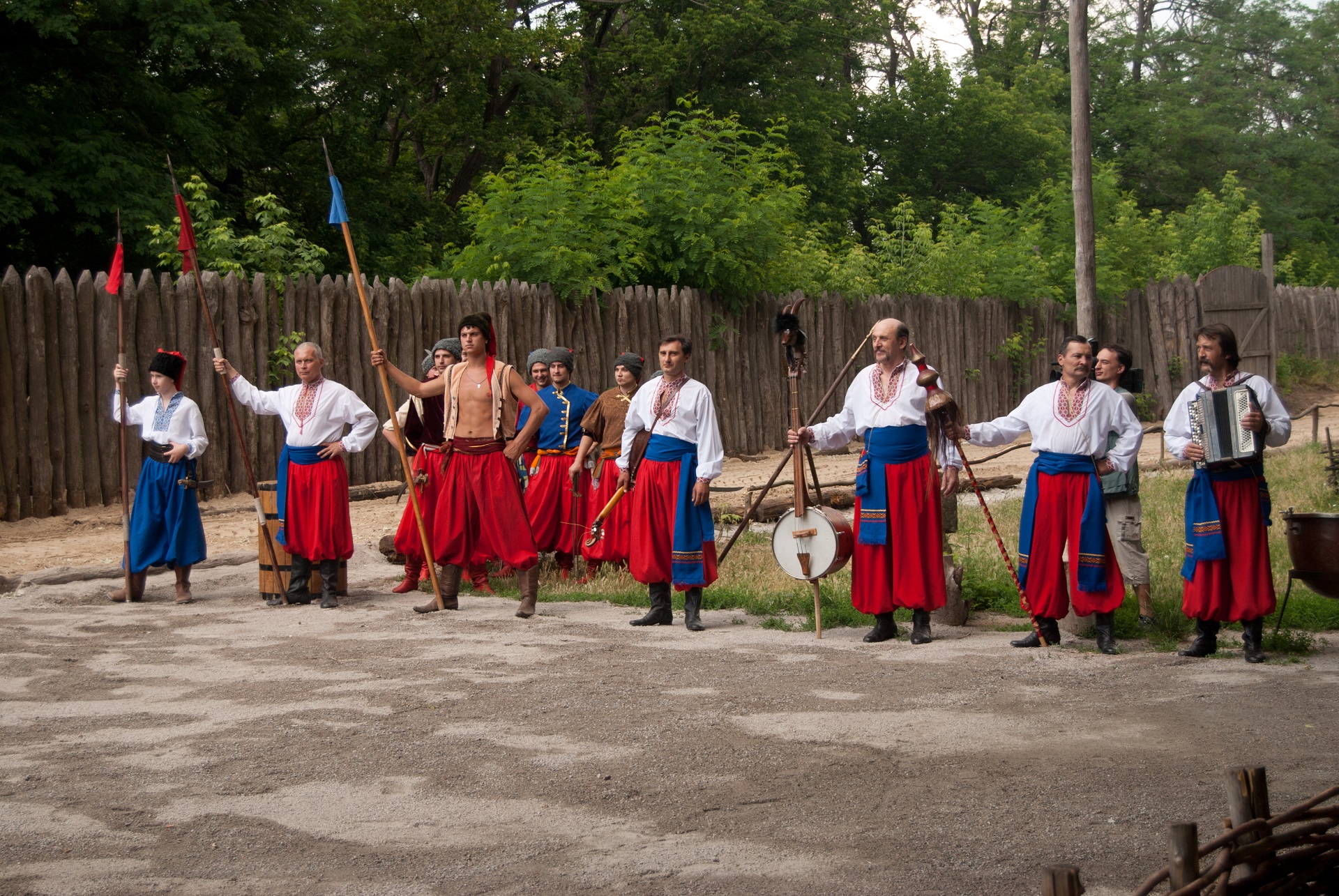 We provide an exposition of weapons from the time of the Civil War, as well as an extravagant uniform of the Khortytsia soldiers. Besides, you can see the unique exposition of antique irons. The collection totals more than 200 items and is constantly updated. Other household items of the 19-20 centuries, as well as an exposition of Ukrainian towels and a windmill will be interesting for you. There is a riding club within the territory of the Horsemen Theater, where lovers of horses, horse riding and equestrian sports gather. There is the “Marine Museum” near the Horsemen Theater. The Poddniprovie territory and in particular Khortytsia Island have witnessed many significant historical events. 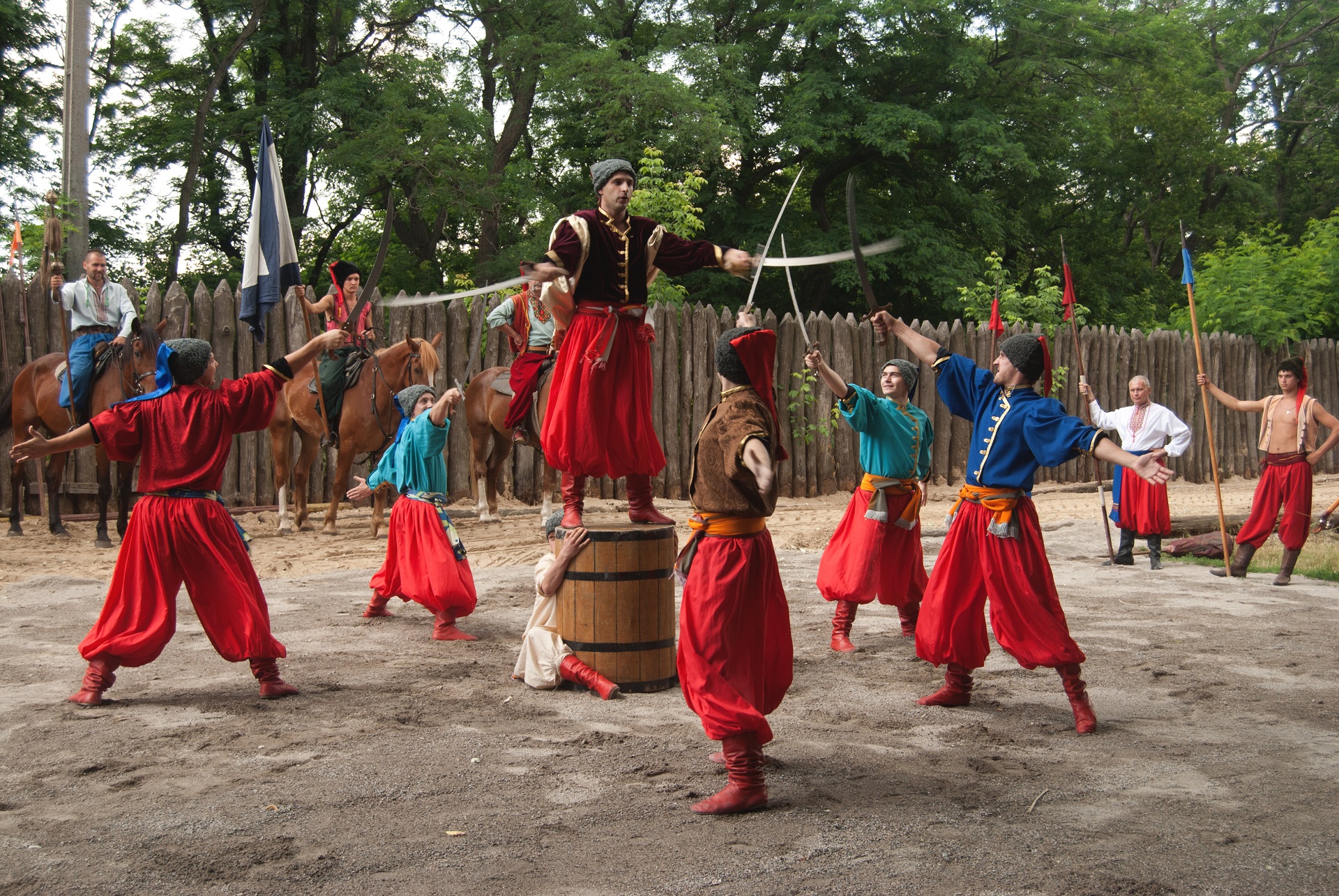 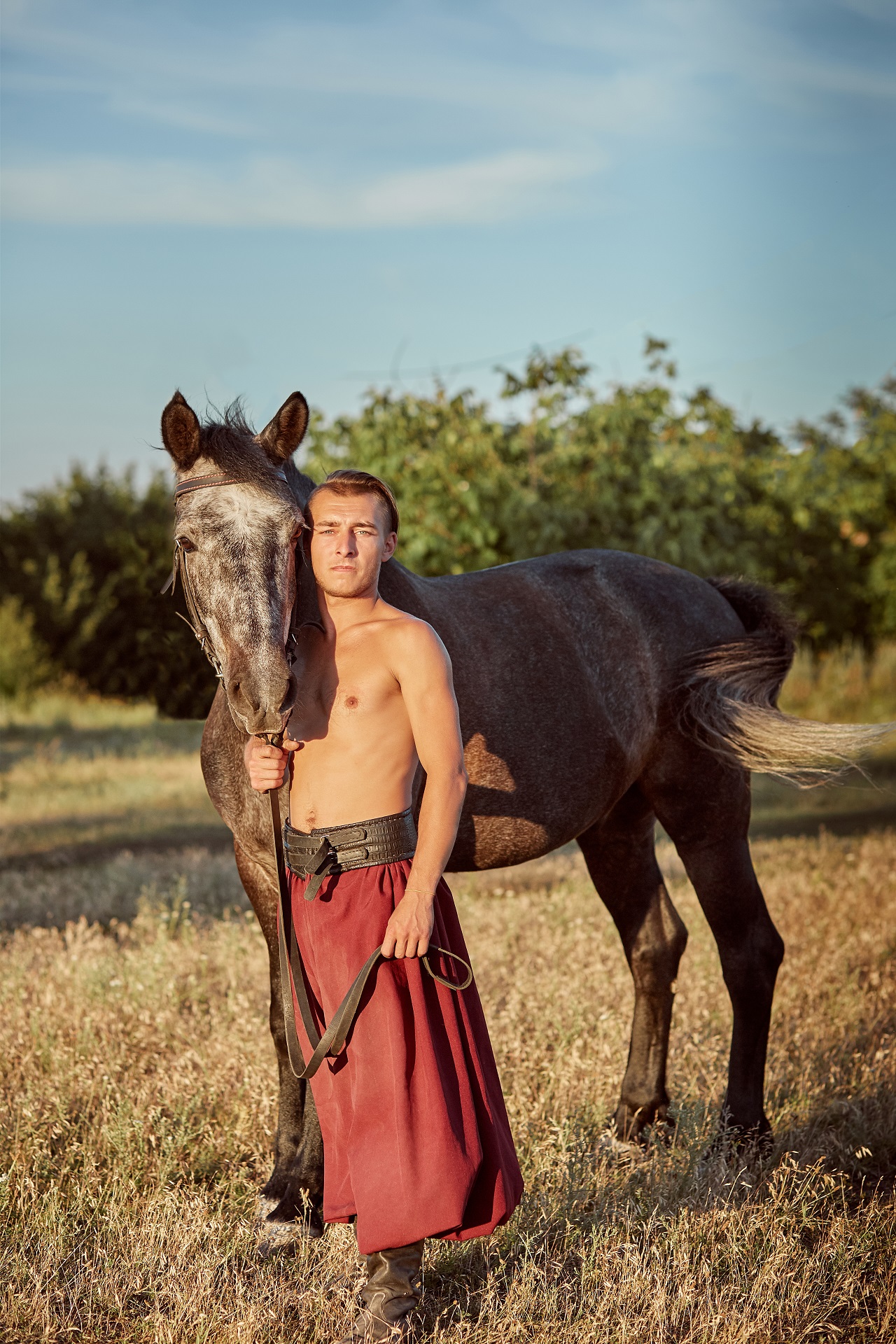 One of the brightest pages of the 18th century on our lands was the Russo-Turkish war of 1736-1739. This explains the presence of a large number of flooded boats near the coast of Khortytsia. During the first Russo-Turkish war, the ships of the Russian squadron could not pass through the Dnipro rapids to the Black Sea and were flooded. Since 1999, the ships began to be lifted from the bed of the Dnipro and breathe life into them - now as the museum exhibitions. Today, visitors have the opportunity to see with their own eyes and touch the unique collection of Cossack boats and anchors, which have no analogues in the world. 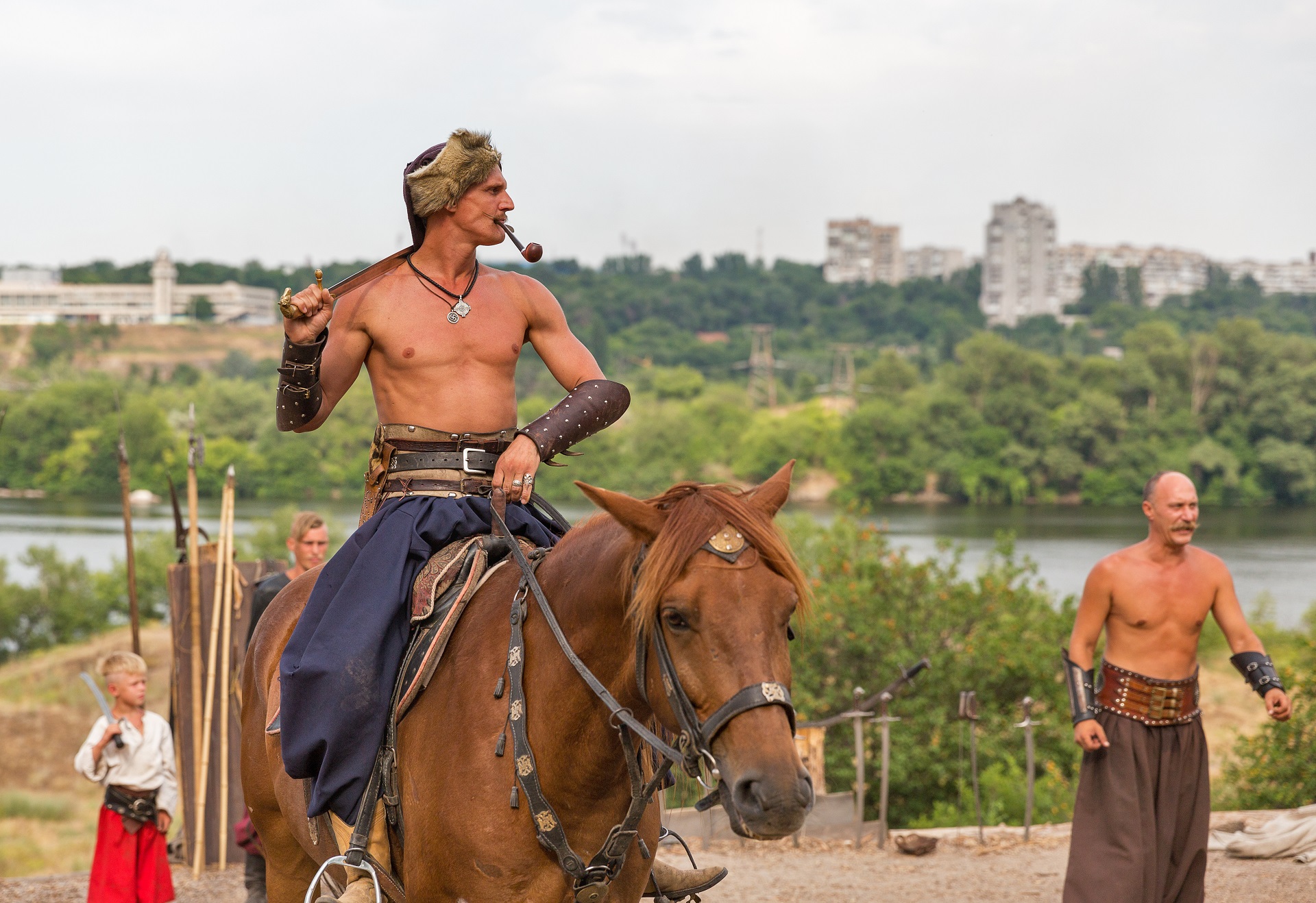 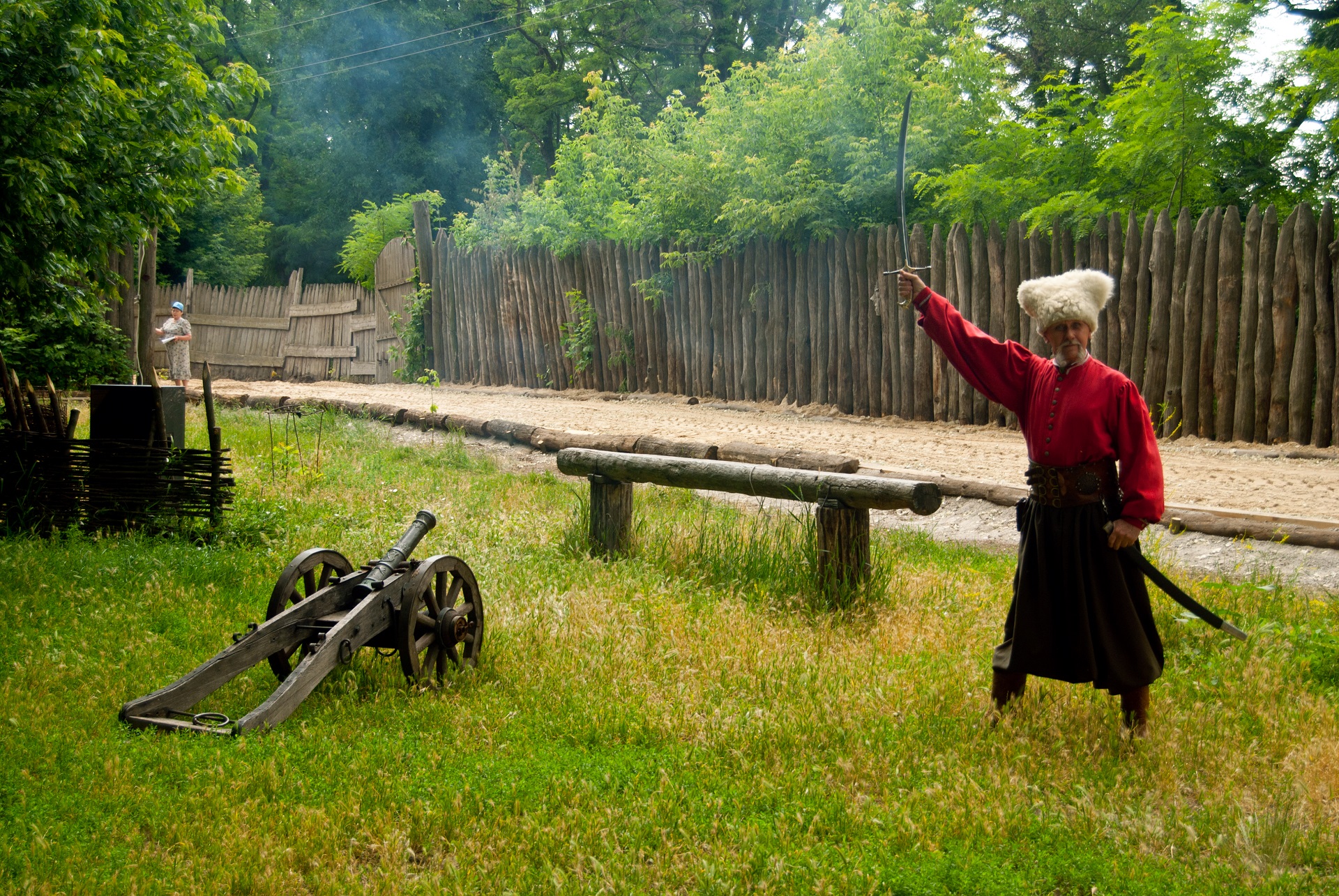 Memorial and tourist complex “Protolche” are an excellent occasion to meet the unique nature reserve. More than a thousand years ago, the ancient Russian settlement Protolche, mentioned in the chronicles, was located at this place.

It is believed that the settlement was a kind of outpost on the border between the Slavic state group and the nomadic Steppe. The scale of the monument, its extremely important strategic position, give good reason to consider Protolche one of the places, from which the militaryadministrative center - Zaporizhzhia Sich was subsequently created. Protolche is interesting not only from the historical point of view, it is a unique natural monument, an area of absolute preservation. A complex of more than 20 lakes, stream and islets are the remains of the once endless flooded area of the Great Meadow of Zaporizhzhia. More than 28 species of animals, 47 - fish, 226 - birds live here. 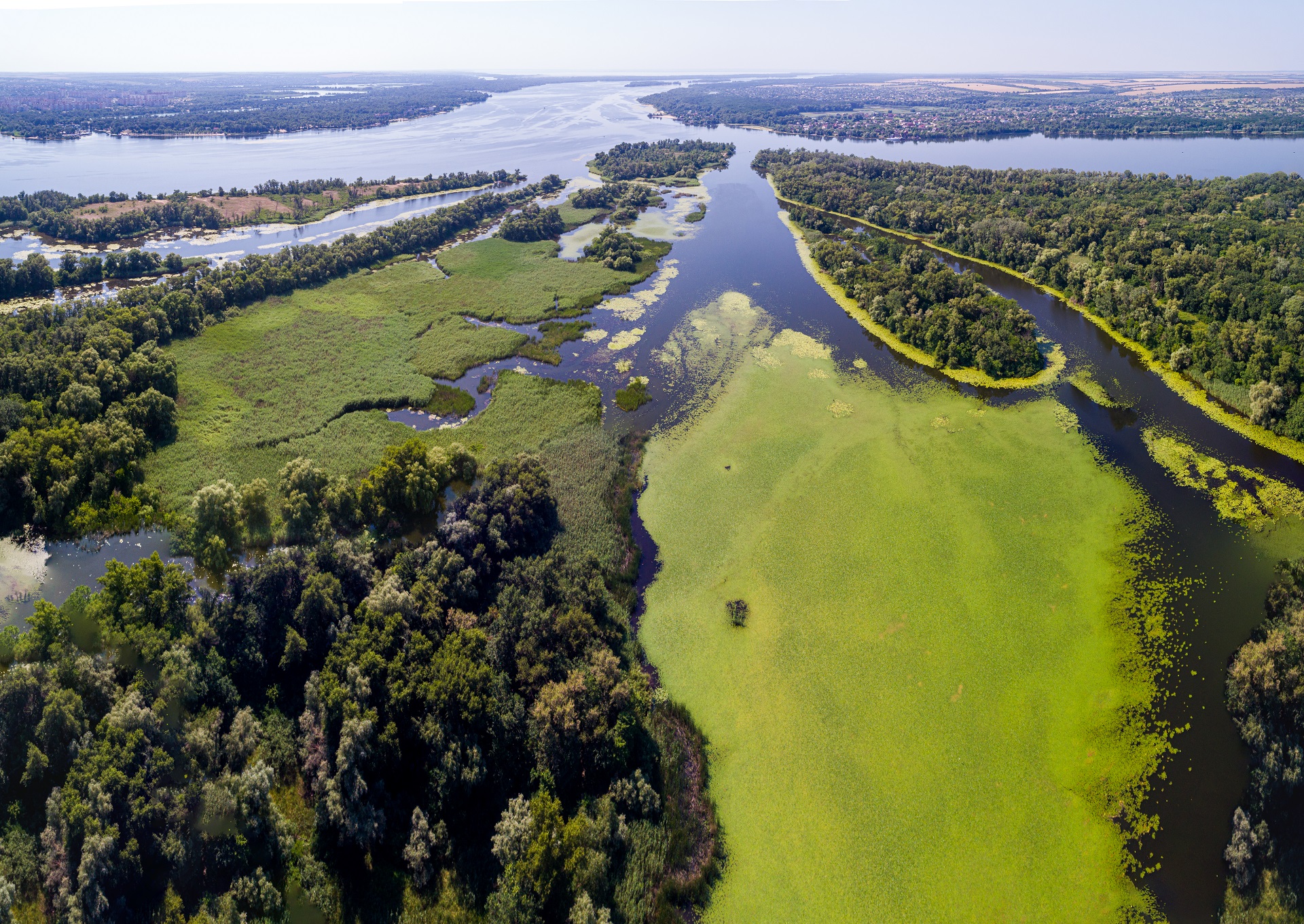 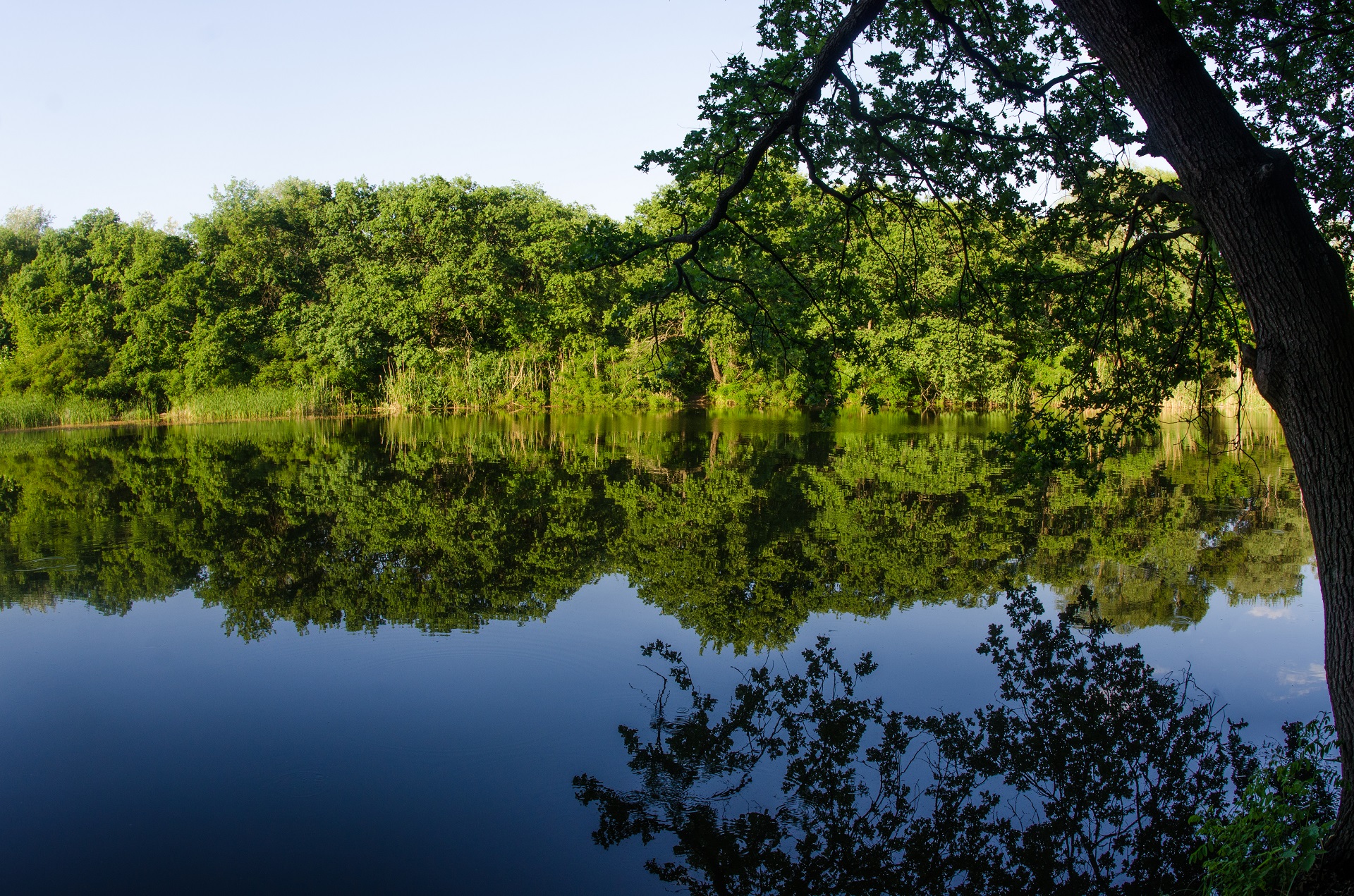 “Protolche” is located in the southern part of the island, in the zone of absolute preservation. There is an intensive process of the historical landscape restoration.

Taking into account the absolute preservation of the territory, it is forbidden to drive or bloat by any floating crafts, and to enter only being accompanied by a reserve worker! 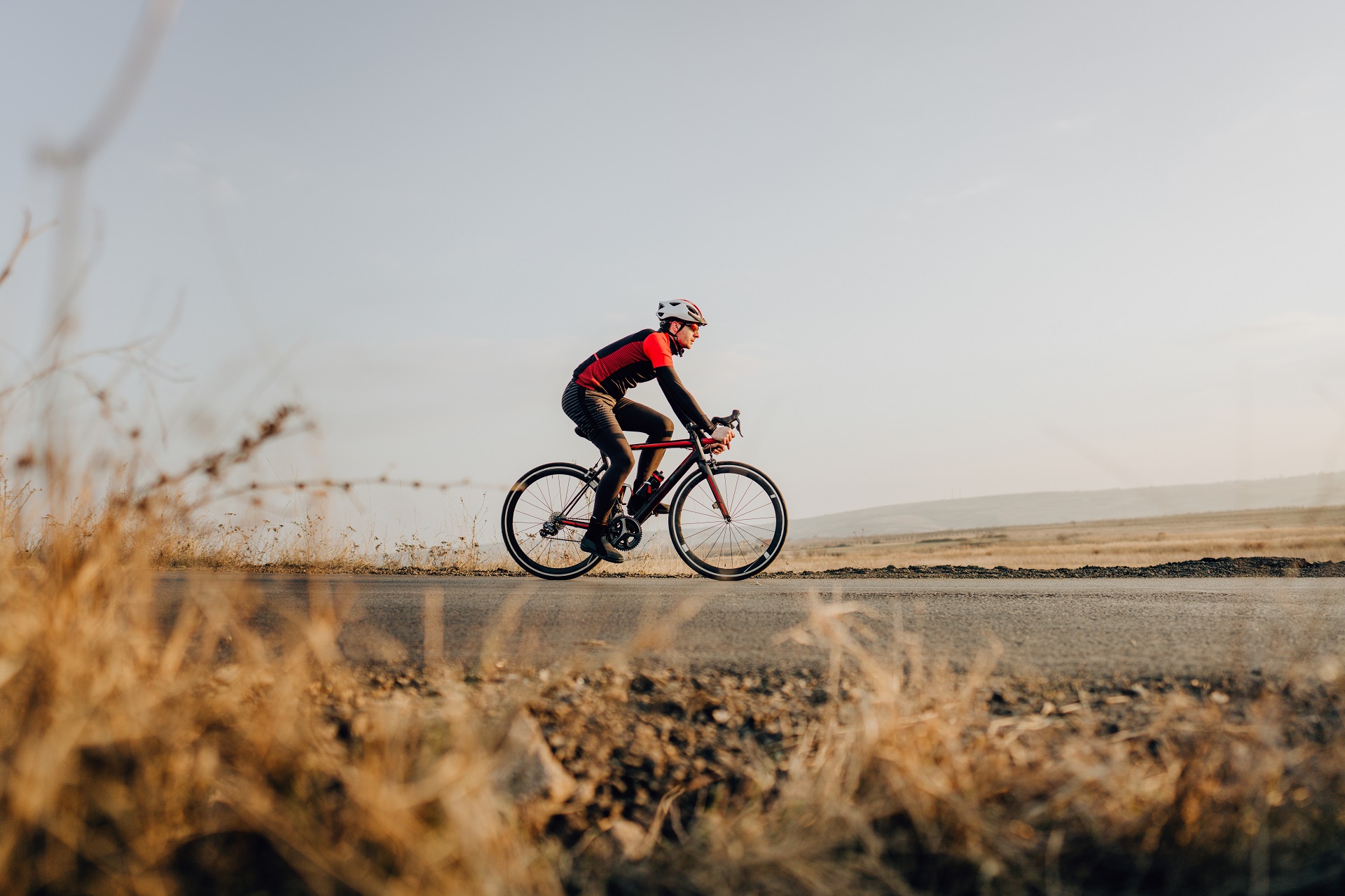 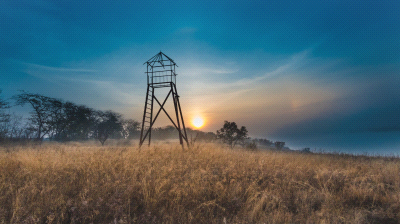